Belarusian patriotism – what is it?

We often appeal to patriotism without always understanding its essence. We have even become accustomed to the fact that patriotism is an umbrella for realizing someone's political goals, and even more often, certain business interests. Meanwhile, patriotism is not a political concept. Explanatory dictionaries define patriotism as commitment and love for Fatherland, country, and people.

However, each nation has its own vision of patriotism, which has been formed over centuries and reflects its "mental code": traditions, requests and aspirations. Some see patriotism in the greatness of the state and military power. Others seek its source in the great past, holiness and God's choice, in the "special way." Still others - in economic hegemony, geopolitical ambitions, the possibility to dominate and dictate.

On the eve of the All-Belarusian People's Assembly, in October-November 2020, the Institute of Sociology of the National Academy of Sciences of Belarus, on demand of the Belarusian Institute of Strategic Research, held a survey among Belarusians aged 18 and older on the issues of historical past and patriotism. The total sampling was 1,317 respondents. The survey used a randomized republican multi-stage sample set with quota control at the last stag.

As polls have shown, for the majority of citizens, irrespective to their status and political views, Belarus is the highest value, the nation-uniting platform on which the future is built. At the same time, the patriotism of Belarusians is active. It manifests itself in attachment to one's land, home, small homeland, relatives and close ones, and a willingness to take responsibility for personal well-being. The modern Belarusian is alien to “not in my backyard” mentality – he wants to be involved in solving the relevant challenges of the present, and determining the future of Belarus. 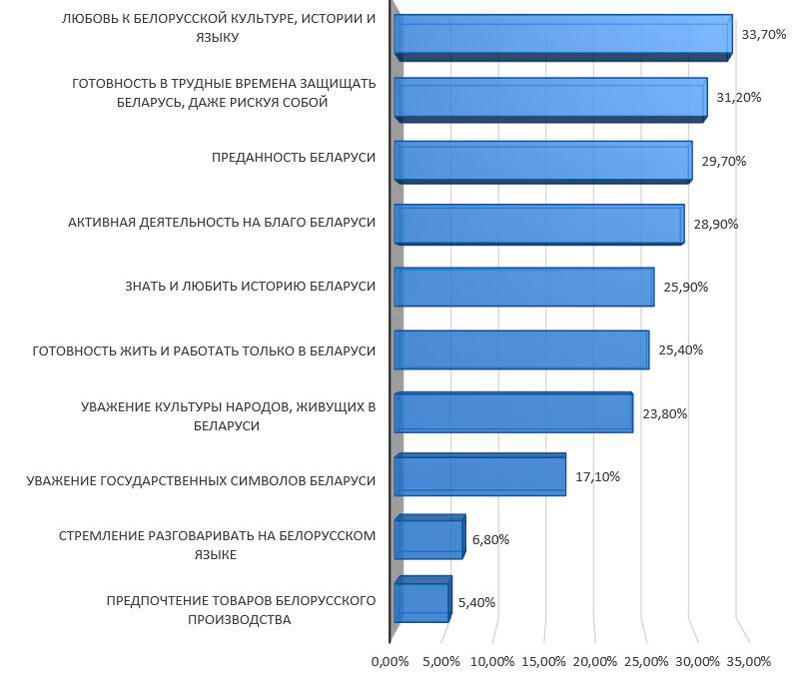 Responds to the question "What does it mean for you to be a patriot of Belarus?", %

The state's calling is to treat the awakened and sparkling energy of society as carefully as possible.

In conditions of a not always friendly world and fierce competition, patriotism has become one of the internal moral pillars of a person, the guidelines of his worldview. At the same time, a sense of patriotism cannot be imposed by decrees or orders, much less taught.

Patriotism is formed by painstaking, thoughtful and concerted work of society and the state, respect for history, and understanding the role of Belarus in the modern world. Imparting a constructive love for the land is the primary meaning of upbringing and education, ideological and information policy of the state. The depth of patriotism is instilled genetically, first of all, in the family, through family traditions, fests, and the transfer of wisdom from elders to juniors.

Memorizing the past and creating the present – the formula for the future. Responding to the citizens' request for participation, recognition and self-realization, we implement the main idea of patriotism which consists not in slogans and myths, but in active love for the Motherland, starting with our own family and home and ending with the formation of a positive image of Belarus in the world.