In the last decade, the concepts of "hybrid warfare" and "hybrid aggression" have gained a peculiar kind of popularity in political discourse, but no unified approaches to their interpretation have yet been developed.

Some approaches to the concept of "hybrid warfare" combine propaganda with such radical methods as terrorist acts and the local use of military force. With the rapid development of communication media (Internet, instant messengers, Telegram-channels, video hosting, etc.) "hybrid warfare" is increasingly analysed through the prism of info-war.

In this regard, we should take note of the tendency of identifying the concepts of "hybrid warfare" with political technologies, which in general terms are defined as the sum of numerous tools and methods of social impact. The main purpose of these tools is generally the formation of motivation: needs, norms, values, stereotypes ultimately determining a person's behaviour. In the context of the so-called hybrid warfare, mobilization technologies are the most likely to be applied. The mechanism of their action in most cases is based on the "friend-or-foe" or "friend-enemy" opposition. Consolidation of society "for" or "against" someone or something sharpens a sense of community as the basis of any kind of collective identity (civil, religious, national).

Stove-piping, memes and fake news appeal to the emotional perception of things and events that encourages momentary action. This brings these tools closer to such behavioural concepts as behaviourism and ethology, the essence of which is to appeal to the natural instincts of man, building a simple chain "stimulus-response", "motivation-action". In most cases, they are focused on manipulation, that is, latent control of public awareness.

Counteracting such manipulation directly in the information field is ineffective, moreover, it requires considerable permanent engagement of both material and intellectual resources. The most effective measure in this regard is to develop own "information immunity" – resistance to external negative influences.

Over time, such immunity will in any case be acquired by society in an evolutionary way. For example, television advertising or Black Public Relations no longer have such a clear motivational impact on the information consumer as they did twenty or thirty years ago. However, the process will be accelerated by developing the audience's information literacy and the ability to analyse and evaluate the content offered. Public understanding of the essence of communication processes and the nature of destructive mechanisms significantly reduces the risks associated with the development of the information sector.

An established and indisputable norm of school curriculum is to instill the skills of analysing, dissecting and interpreting a literary work in the students. An additional option for teaching various types and forms of information will help increase both the resilience of society to various kinds of stove-piping and the quality of its agenda in the media space. 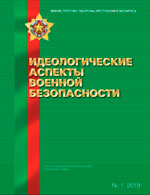