Reforms and transformations in Kazakhstan and Belarus

On June 25, 2021, the Belarusian Institute of Strategic Research hosted the Belarus-Kazakhstan International Conference "On reforms and transformation in Kazakhstan and Belarus at the current stage". The event was organized in association with the Embassy of the Republic of Kazakhstan in the Republic of Belarus.

The conference was attended by Ambassador Extraordinary and Plenipotentiary of Kazakhstan to Belarus Askar Beisenbayev, Director of the Belarusian Institute of Strategic Research Oleg Makarov, deputies of the House of Representatives of the National Assembly of the Republic of Belarus Svetlana Lyubetskaya, Oleg Gaidukevich, Igor Marzalyuk, Deputy Director of the Kazakhstan Institute for Strategic Studies (KISI) Alua Zholdybalina, representatives of the Ministry of Economy and the Ministry of Foreign Affairs of the Republic of Belarus, Ministry of Foreign Affairs of the Republic of Kazakhstan, BISR analysts, experts and scientists of the Belarusian State University, the Belarusian State University of Economics, the Kazakhstan Open World Center for Analysis and Forecasting Public Foundation.

The participants discussed the Belarusian experience of socio-political transformations and socio-economic development and a new course of reforms of Kazakh President Kassym-Jomart Tokayev.

The Conference focused on improving approaches in the field of public administration, ways to enhance the quality of interaction between the state and society in modern conditions, the state and prospects of Belarus-Kazakhstan cooperation, including on the track of expert diplomacy.

In his address, the BISR Director Oleg Makarov noted that "the experience of Kazakhstan, following the way of its reforms, inspires respect and interest. Belarus is also now on the track that has no analogues in the world. This is evidenced by the unique experience of All-Belarusian People's Assembly, which was born on our national soil, not imposed from the outside".

Ambassador Extraordinary and Plenipotentiary Askar Beisenbayev stressed the importance of the Conference agenda for Kazakhstan and Belarus, saying that friendly relations of our states today are a unique example for other countries.

Mr. Ambassador noted the continuity and consistency of implementing the President K.-J.Tokayev's reforms aimed at a qualitatively new level of development of Kazakhstan and providing a reset of the country's political system, realizing relevant political, social and economic transformations.

Chairperson of the Standing Commission on Legislation of the House of Representatives of the National Assembly of the Republic of Belarus, Head of the working group on cooperation with the Parliament of Kazakhstan, Svetlana Lyubetskaya focused on recent achievements of Belarus and Kazakhstan, the similarity of the two countries' positions on most challenges of regional and international politics.

"Joint work with Kazakhstan in all areas is progressing in a friendly atmosphere, and the whole set of Belarusian-Kazakh cooperation, implementation of new opportunities is currently a priority task that is followed by our public administration".

Deputy Chairperson of the Standing Committee of the House of Representatives of the National Assembly of the Republic of Belarus on International Affairs, Leader of the Liberal Democratic Party of Belarus, Oleg Gaidukevich paid attention to the Kazakh experience of political transformations. He noted that its "uniqueness is how make the change of elites and generations without destroying own country, retaining the achievements that are the case, conducting the transit of power democratically, based on public opinion. And the people approved this transit, voted for it, and things turned out".

Chairperson of the Standing Commission of the House of Representatives on Education, Culture and Science Igor Marzalyuk emphasized that the economic policy of Belarus and Kazakhstan is characterized by the principle of comprehensive economic pragmatism:

"We want to build a high-quality economic model with both Kazakh and Belarusian hearts. That's what unites us".

In this regard, the deputy stressed the special relevance for Belarus of the idea of creating the Eurasian Economic Space, called for deepening relations with EEU and CSTO partners, Kazakhstan, Russia, China, to be pragmatic and build relations with the nearest friends and partners.

KISI Deputy Director, Alua Zholdybalina in her address focused on the key principles of the new political course of the Kazakh President, paying special attention to highlighting goals, principles and forms of activity of the National Council of Public Trust under the President of the Republic of Kazakhstan. The speaker stressed that transformations implemented in the country since 2019 are aimed at "creating a modern effective state through transiting to a service model of its interaction with society".

In his report, the Open World Center for Analysis and Forecasting Public Foundation Economic Adviser, Alisher Nauruzov noted the relevant tasks for the government to build a new course of economic policy, taking into account contemporary challenges through introducing new model of public administration.

In his opinion, the important aspects for further economic reforms in Kazakhstan are the improvement of monetary, fiscal and budgetary policy, the policy of investments attraction, ensuring transparency and open competition in the markets, reducing the state's presence in the economy, restoring economic growth and further development in the post-pandemic period.

The Belarusian Ministry of Economy Representative Alexander Kashinsky focused on a detailed analysis of specific features of the Program of socio-economic development of the Republic of Belarus for 2021-2025, provisions of which are focused on real intentions of the Belarusian state in home policy. Those include retaining of the social orientation of the state, further development of the traditional potential of industries and agriculture on a new technological and digital basis, as well as creating new high-tech industries and enterprises.

BISR analyst Svetlana Aleinikova confirmed the commitment of the Belarusian society to develop closer relations with Kazakhstan based on sociological research findings. For instance, according to sociologists, the third of Belarusians support friendly and good-neighborly relations between Minsk and Nur-Sultan.

Describing the peculiarities of the socio-political situation in Belarus, Svetlana Aleinikova noted that the main elements of a resilient and integral value platform of the Belarusian society are peace, security, freedom, stability. At the same time, the Belarusians "reveal new needs and requests of new social and occupational groups that can be summarized by a demand for the development of the country. Expectations of more effective development of the regions, the governmental activities, and the political system, come to the fore. These demands have been converted into decisions of the 6 All-Belarusian People's Assembly and are currently considered while updating the Constitution of the Republic of Belarus".

In turn, as assessed by member of the Constitutional Commission, BISR analyst Ekaterina Rechits, in the preparation of the constitutional reform in Belarus , the broad social presentation of the Commission both determines the project compliance with the needs of society, and is a condition for legitimacy of the reform itself. In redeploying constitutional powers between state bodies and officials, the aim is to boost real competencies of all governmental branches based on expertise of the past independence period and considering modern challenges. The institute of the Presidency in Belarus remains the core on which the system of public administration is based.

Director of the Center for Eurasian and European Studies, Associate Professor of the Faculty of International Relations of the Belarusian State University, Roza Turarbekova noted that there are prospects for building specific areas of mutual cooperation and joint efforts for Belarus and Kazakhstan. In her opinion, Kazakhstan is implementing large-scale reforms aimed at a deep political transformation of the country, as well as interaction of the two countries inside EEU. In particular, timely elections of rural governors at the local level in Kazakhstan represents a clear positive experience for Belarus.

The participants of the meeting, having considered the agenda of the Belarusian-Kazakh partnership in the context of the socio-economic and socio-political changes being the case in the two countries, concluded on the importance to continue expert discussions that will contribute to the search for adequate responses to the challenges of the time, active development of relations between Belarus and Kazakhstan. 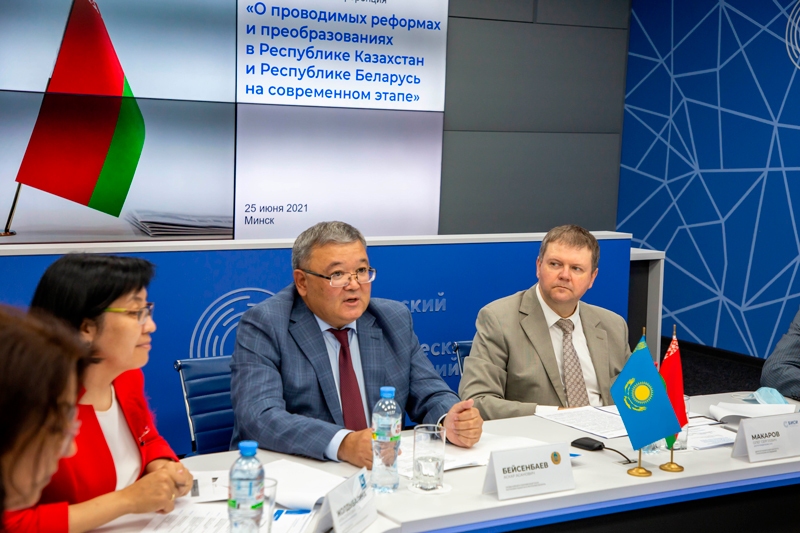 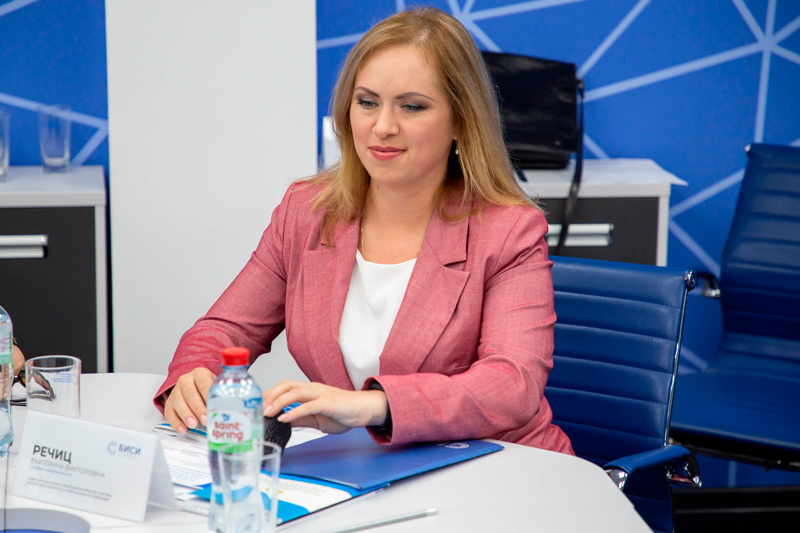 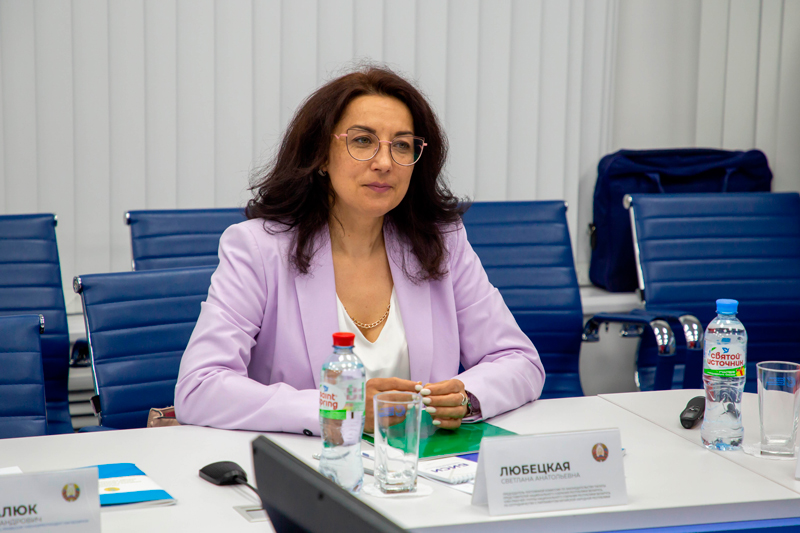 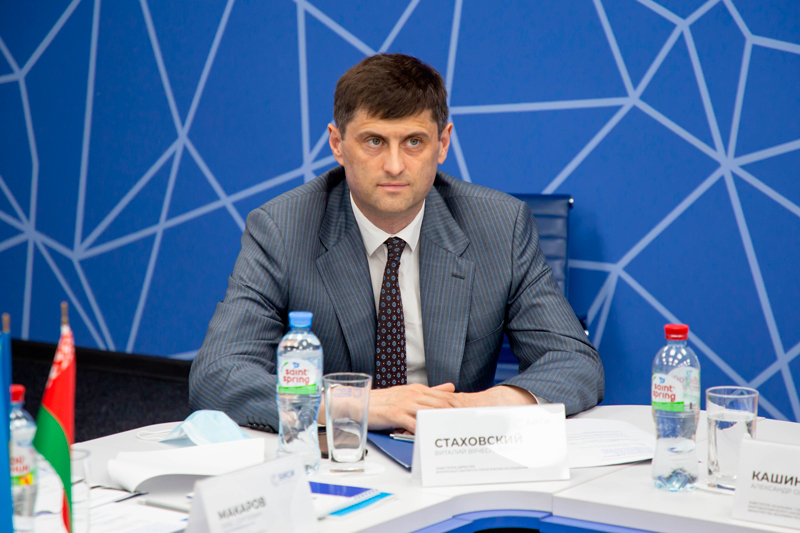 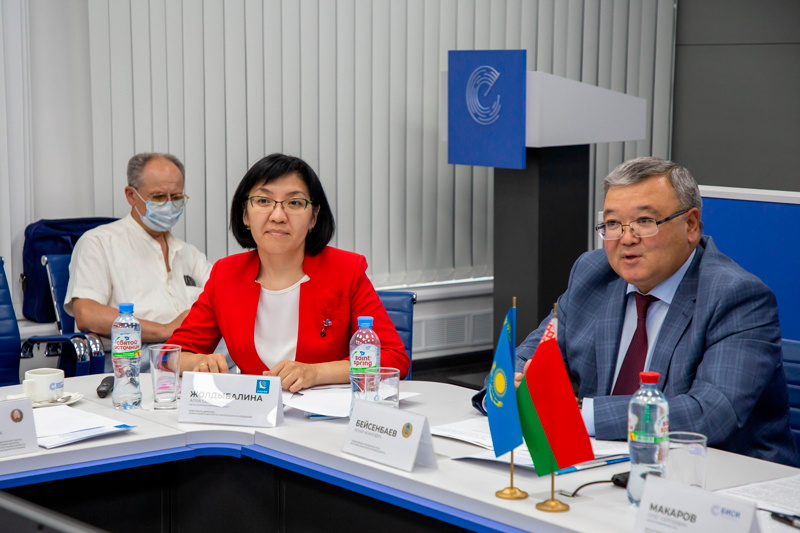 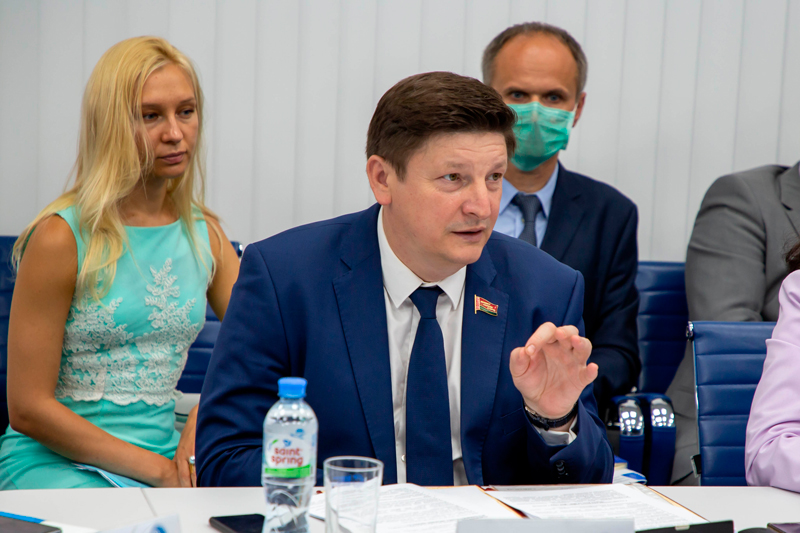 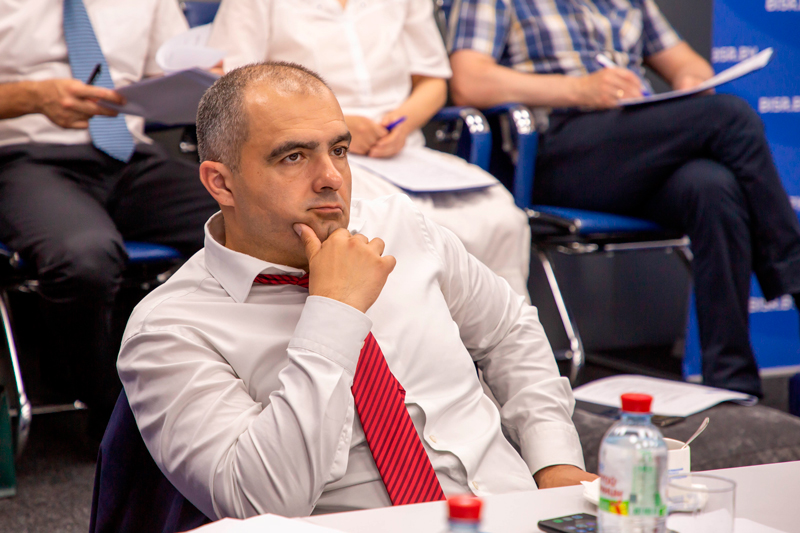 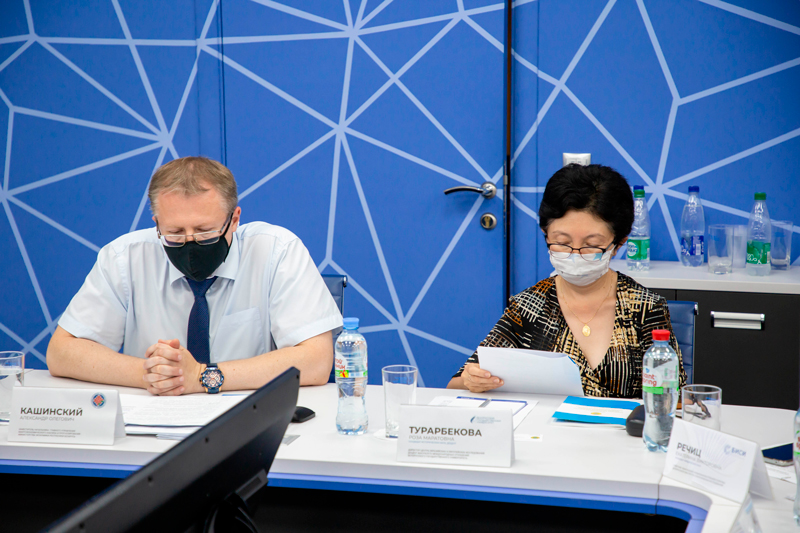 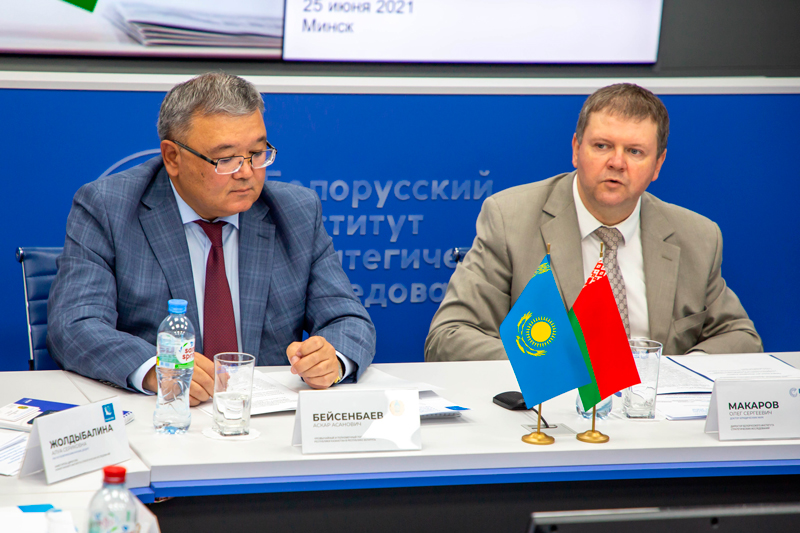 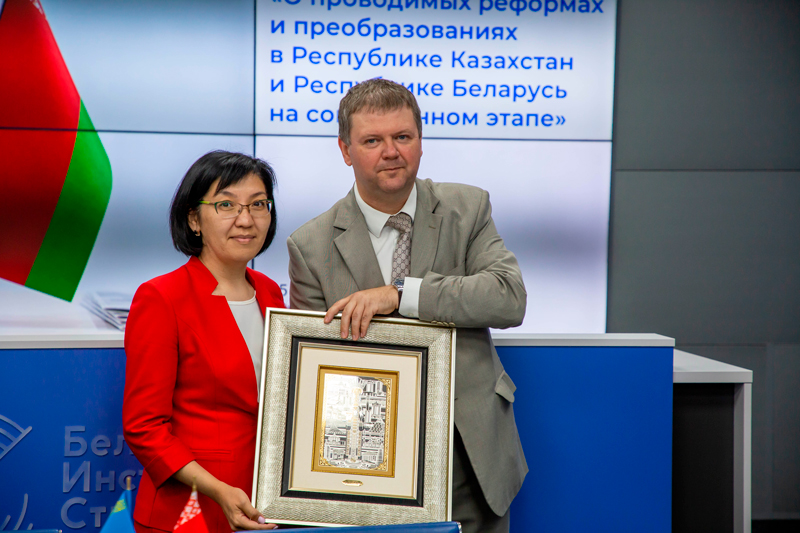 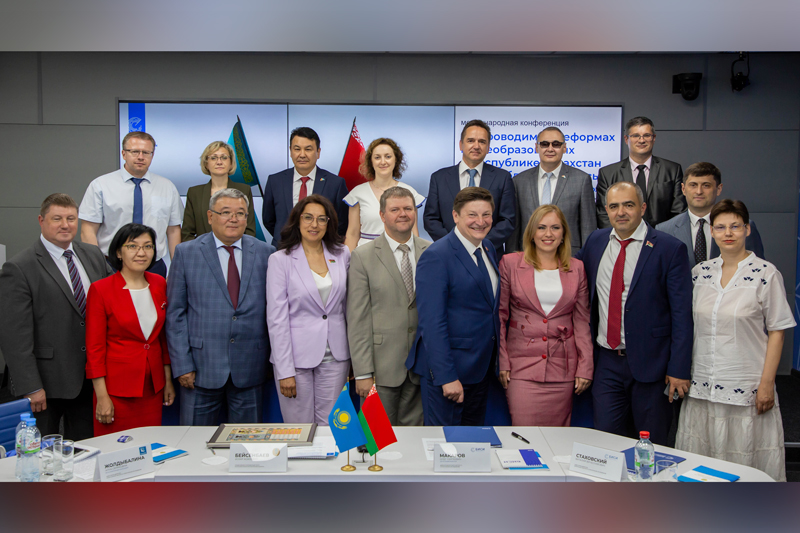 Expert dialogue as an element of enhancing the ...

On November 08, 2021, BISR held a round table "Expert dialogue as an element of strengthening the Union Sta...
Дата публикации
08 november 2021

Synthesis of science and analytics in the inter...

On October 21, 2021, BISR analysts held a round table with Chairman of the Presidium of the National Academ...
Дата публикации
21 october 2021