In recent years, all the "three pillars" of patriotism have been under violent attack: historical memory, identity and behavioral attitudes of the human, his will to act for the benefit of the country. This message was delivered by BISR analyst, Candidate of Sociological Sciences, Associate Professor Svetlana Aleinikova, at the International Conference "Historical memory and patriotism – the most important fundamental values of the Belarusian society and the state, the factors of consolidation in the face of modern challenges and threats". 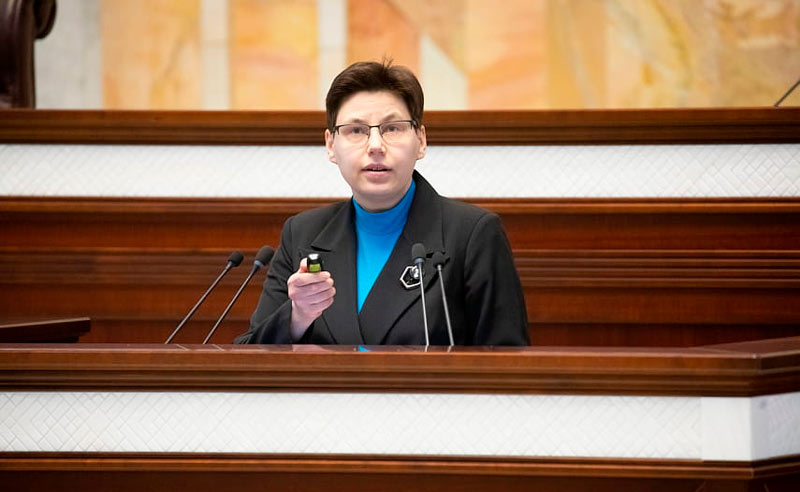 The scientist noted with regret that in the last decade, the issue of patriotism is increasingly addressed in the areas of concern. The reason for that, as seen by the BISR analyst, is a number of new conditions and challenges that both Belarus and the entire post-Soviet space has to face:

– A precondition to taken into account are the new dynamically growing needs and demands of society, associated mainly with the widespread informatization and digitalization of our lives, actively imposed fashion for individualism and consumerism. A major challenge for many countries is the gradual absorbing of national specificity by Western mass culture. A separate topic is the manifestation of the deforming historical memory as a result of deliberate and purposeful distortion of history, imposing alien meanings and interpretations, politicizing key events and dates.

– A new target in recent years has been the very concept of patriotism, which is increasingly exposed to attempts of devaluation, ridiculing, and presenting in negative terms. All the "three pillars" of patriotism have been under violent attack: historical memory, identity and behavioral attitudes of the human, his will to act for the benefit of the country.

Replying to the question how deeply the Belarusian society perceives the concept of patriotism today, the BISR analyst gave details of several social studies conducted by the BISR that made it possible to identify the reference points in the historical memory of modern generations and the peculiarities of their perception of patriotism. Svetlana Aleinikova said:

– Polls have shown that the majority of citizens respect the history, the historical past of the country, but show little interest in it. At best, they are interested in history from time to time. Predictably, the main sources of information about the historical past are movies, the Internet, textbooks, friends. The most significant periods of the country for citizens are the period of independence of the Republic of Belarus, the preceding Soviet period of the BSSR, and the period of the Grand Duchy of Lithuania.

The significance of these periods for citizens is confirmed by the list of events in the national history, which they perceive as the main in the history of Belarus. The main event is the liberation of Belarus from the Nazi occupation. But has the perception of the country's heroic past changed? Svetlana Aleinikova gave a typical example:

– More than 1.5 thousand respondents, when recalling the names of war heroes, mentioned only six: Oleg Koshevoy, Marat Kazey, Vera Kharuzhaya, commanders Konstantin Rokossovsky, Vasily Sokolovsky and Ivan Chernyakhovsky. A quarter of Belarusians consider monuments of the Great Patriotic War as symbols. That is, they are gradually losing their symbolic resource.

The large-scale forum held in Minsk today, was organized by the House of Representatives of the National Assembly of Belarus, the National Academy of Sciences and the Academy of Public Administration under the President of the Republic of Belarus.

In the foyer of the Oval Hall of the Government House, the forum participants could see the exhibition "Historical memory in the book heritage" with printed publications from the funds of the National Academy of Sciences, the Presidential Library and the National Book Chamber, as well as the exhibition "Partisans of Belarus" in the framework of the same Internet project by "Belarus Today" Publishing House and the National Archive.