The ethno-confessional world, trust of the church, gradual decline of religiosity: the main trends in the sphere of religion

The main result of the balanced and consistent policy pursued by the state in the ethno-confessional sphere is the resilience and stability of relations between representatives of different confessions, religious beliefs and nationalities. This is confirmed by a number of opinion polls conducted on demand of the Belarusian Institute of Strategic Research. Based on the survey, about 80% of citizens are confident in their protection from the danger of harassment due to religious beliefs or nationality.

In the religious sphere, sociologists have recorded a somewhat paradoxical situation. It lies in the fact that over 90% of citizens identify themselves with one or another confession (mainly Orthodoxy and Catholicism), but at the same time our society can hardly be called religious. Religious tradition is most often expressed in following rituals (baptism, wedding, funeral service) and celebrating religious holidays (Easter, Christmas, Radonitsa (when Orthodox Christians commemorate their dead), Dzyady (Forefathers Eve)).

The peculiarity of the younger generation is the predictably low religiosity characteristic of this age group – 40% of respondents declared their belief in God, while 60% consider themselves to be unbelievers or undecided. The confessional self–identification of young people is also inferior to the "adult" demographic groups: about 60% consider themselves Orthodox and more than 7% - Catholics. 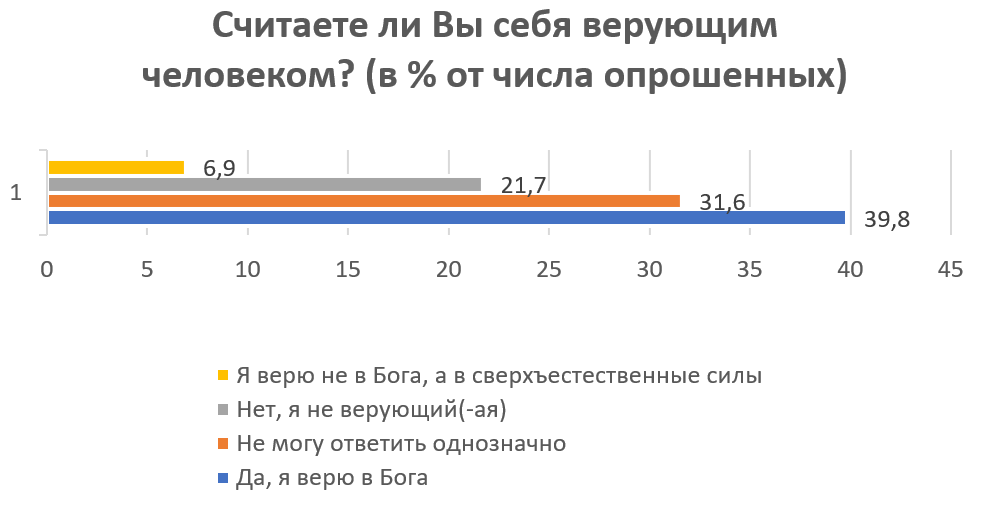 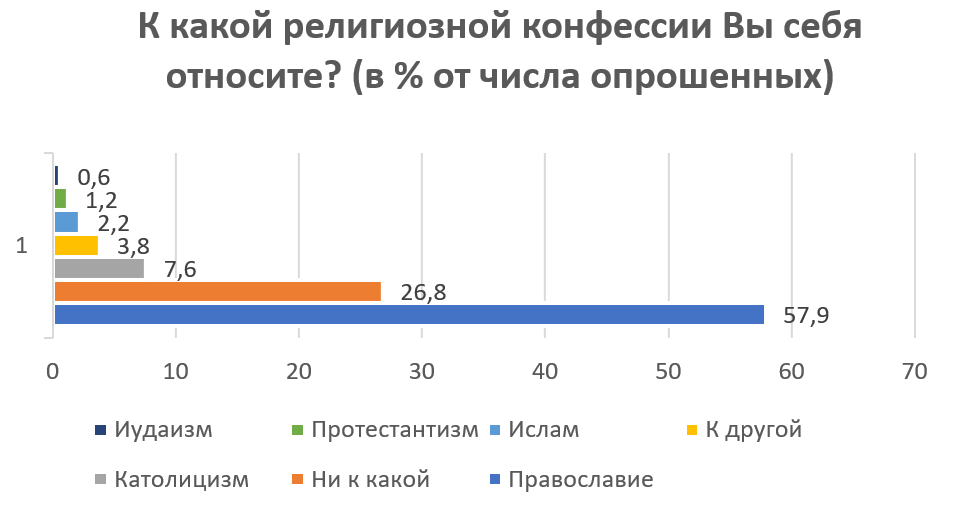 At the same time, as experts note, the trend towards secularization of young people is peculiar not only to Belarus. Russian young people, for instance, are less religious than Russians on the whole. In particular, 42 percent of young people aged 18 to 30 do not consider themselves believers, while the nationwide figure was 24 percent (a survey by the Public Opinion Foundation conducted in November 2020).

The attitude of young people to religion as a value is largely shaped by the informational "habitat", which causes the growth of secular trends and a decline in interest in religious issues among young people. However, the same processes also stimulate a certain evolution of religious identification, building of a special religious infrastructure on the Internet (for example, websites, online services, religious rites, etc.).

Another important feature of Belarusians is their generally friendly attitude towards the peoples of neighboring states, which fits into the Belarusian tradition of good neighborliness. For instance, most respondents are surveys are convinced that there is no tension or contradictions between people of different nationalities living in the country, believing that there are much more similarities than differences between Belarusians, Russians, Ukrainians and Lithuanians.

Notably, Belarusians do not have any rejection or negative attitude towards representatives of geographically, mentally and culturally "distant" nationalities (for example, the peoples of Central Asia or Transcaucasia). This perception is to a great extent a legacy of the Soviet past, when the republics of the USSR were perceived as part of a single huge country. The positive perception of the peoples of the post-Soviet countries by young people allows us to speak about the continuity of traditional Belarusian goodwill.

In the conditions of civilizational contradictions, it is Belarus with the traditions of good neighborliness and identification with the Slavic world (53% of respondents think so) that remains almost one of the main factors constraining the general European chaos. The unity of Belarusians in most key values, regardless of their age and place of residence, acts as the ideological basis that forms the stable immunity of the Belarusian society to negative influences, ensures ethno-confessional peace and harmony.

Gaullism: the Past changing the Present

When I want to know what France thinks, I ask myself. Charles de Gaulle The pandemic as a global crisis s...
Дата публикации
14 january 2022
Olga Lazorkina