They love money, open to new experiences, and socially active

The heroes of the 1970s youth were the space explorers Yuri Gagarin and Valentina Tereshkova. Those born in the 1990s are seeking to act like enterprising Elon Musk and Kim Kardashian. Young people of new formation – Generation Z – have their own idols and role models, the choice of which determines their values and attitudes. Indeed, we are all very different. And it is very critical that the link between generations, which ensures succession in the development of society, is not interrupted, for it is an inexhaustible source of rich life experience and wisdom handed down from elders to youth. We should remember our past not to make the same mistakes in the future. We talked to Nikolai Sukhotsky, the Belarusian Institute of Strategic Research analyst, about how the generation change is taking place and what ideals Zetas follow.

– Change of generations, what is it? How often does this phenomenon occur in soci¬ety and what does it dep¬end on? 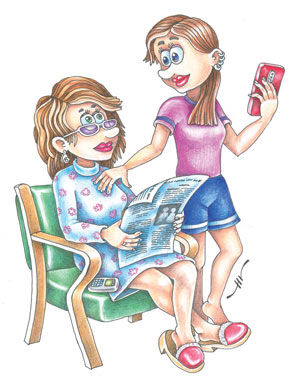 – In sociology, a generation is a social and age category, a nominal group of people whose age is limited by a certain interval. The person's active development falls on the span of 17 to 25 years old. The experience gain¬ed in this period provides a fundamental formative impact on the rest of life, during which people become less susceptible to change.

– Does always the change of generations result in divide between them? What is the risk?

– Of course, not always. At present, however, there is a redistribution of the succession process and generational change in society. On the one hand, we see positive aspects: an increased innovative activity of young people, prompt development of information and communication technologies. On the other hand, against the impact of the Internet on our lives, there is a shift in the frame of reference for social growth of young people. There is a trend of generational divide. This is when the older generation does not have sufficient authority, and its system of moral values is no longer of any significance in the youth environment, which is sinking into a state of spiritual and moral vacuum. Many experts empha¬size that such situation may result in negative social consequences for society; in particular, it threatens its stability and integ¬rity, especially amidst expansion of the mass ¬consumer culture standards.

– Each generation is characterized by its own behavioral beacons to which parents guide their children. My parents, for example, used to repeat, "Burdens build character" and "Modesty is charming". And what are the attitudes of the current generation?

– There is a change of generations, whether we like it or not. I understand that more than anyone. But you won't have to crash anything. Let us go through this period of generational change as intelligent people, in a really beautiful way. Because crushing is easy, it will be very hard to restore, or perhaps, will not work. So let's not crush, let's not rush into the pool of these events. Our generation is not ashamed, departing from politics, economy, to pass on to you, the new young generation, and show you, what we have created. But the most important thing is that we pass on a sovereign, independent country to our children and grandchildren. For the first time in the long history, we have our own state with all the attributes.

President of the Republic of Belarus Alexander Lukashenko (address to the staff and builders of the Belarusian NPP on November 7, 2020)

– The life principles of young Belarusians are increasingly separated from the ideals elaborated in the Soviet period, and involve the values of individualism and private life that are unique for the market-oriented social and economic model and the Western way of life. In 1990, only a third of young people were focused on material well-being at the start in life after graduation. Today, the material well-being is one of the main indicators of success among the younger generation and is associated with the ability to buy what you want and what you like, dispose of your own property, freely choose your occupation, place of residence and relocation. As the main precondition for a place of work, young people put forward the wages and pay much less attention to other aspects – good working conditions and mode of work. This means that the current generation of young people has the vision of reality with a reliance on success, material prosperity, achieving high professional and social status. As a result, many of them have environmental influences, especially social stratification, running high. For instance, some kids and teenagers feel embarrassed about having or not having a a certain smartphone or their parents' status.

– Based on outcomes of the BISR study conducted in 2020, try to describe a modern young Belarusian: how he lives, what he likes and what he dreams of. In what way does that image differ from the young man of 20 years ago?

– In general, the Belarusian youth of today have a positive social state of health. This is confirmed by a high degree of satisfaction with their lives: about 80 percent of young men and women are more or less satisfied with their lives (with only about 16 per¬cent dissatisfied). Young people are also optimistic about the fu¬ture: about 60 percent believe their lives will improve ov¬er year to come (only about five percent are pes¬si¬mistic). At the same time, more positive views are typical for the 18-24 year-olds rather than for 25-29 year-olds.

Unlike the youth of early 2000s, modern young people want both to reach material sufficiency and find personal fulfillment. An overwhelming desire to prove their uniqueness explains the increasing interest in independent business activity, the implementation of own projects, the popularity of blogging and freelancing. At the same time, young people often do not take into account the high competition inherent in these areas, where only a few succeed and become stars.

Not the last place in the hierarchy of young people's values take the creation of a strong family, child bearing and rearing. The most popular option for family planning is seen as follows: a father, a mother and two kids. One more positive point: young people are focused on maintaining and boosting their health. This matches the global trend for a healthy lifestyle.

Unlike the youth of early 2000s, for most of today's young men and women, the main source of information is not television, but the Internet. About 85 percent of young users (as said by themselves) most often visit social networks, 50 percent visit entertainment sites with music, movies and news portals, a major part (about 40 percent) visit online stores, a third – educational and science resources. Every fifth young user spends time playing online games, and every tenth spends time reading blogs.

– What are the priorities that new generation follows when choosing their future profession? Is it just a certificate or interest?

– Pleasingly, young people put forward diligent work, enterprise and education as preconditions for a successful life. Young people are aware that to guarantee a secure future for themselves and their families, a hard work and persistence are required. Less often, they see prospects for success in business initiatives, education, as well as in foreign relations and migration. The least interesting keys to a successful life for young people are public service, relocation to Minsk for emplo¬yment and marriage of convenience.

– How does the change of generations affect various spheres of society: labor relations (for example, do young people of today give preference to freelancing and remote work more often), economy, and politics?

– On the whole, young people strive for greater autonomy: about 40 percent of respondents said they are ready to engage in business activity. New forms of employment, including freelancing, are becoming widespread. In the regional context, most of all residents of Minsk and Vitebsk oblasts would like to work in that format (17 percent each). By the way, over the past ten years, the number of pure freelancers (people for whom this type of employment, not part-time job, is the only type of earnings) in Belarus has increased in several times. The ongoing epidemic contributes greatly to the popularization of working outside the office. More and more young women are coming freelance.

The political views of young people generally differ little from those shared by the adult population of the country as a whole. Most boys and girls (about 60 percent) said that there were no differences in their views and those of their parents. At the same time, the survey outcomes speak eloquently about the apolitical nature of the Belarusian youth. For instance, less than one percent of young people aged 18 to 30 took part in the work of parties and other political organizations in our country, and most of young men and women (about 60 percent) are not interested in politics at all. That is, despite the political turbulence of the recent year, we cannot speak of a certain mass politicization of young people.