Value priorities of Belarusians: focusing on peace and welfare

Values are a separate object of research for national and overseas sociologists who carefully study the axiological preferences of Belarusians and thoroughly record the shifts and changes emerging in the value matrix of the people. Public surveys are one of the main tools for identifying value priorities. In November-December 2020, the Social and Humanitarian Research Centre of the Belarus State Economic University, on demand of the Belarusian Institute of Strategic Research (BISR), conducted a national survey on socio-cultural portrait of modern Belarusian society" (sampling of 1500 respondents). After analyzing its results, it can be stated that the worldview of Belarusians to a large extent is determined by a great aspiration for welfare. The article attempts to reveal the content of this idea, which is understood as the trinity of benefits: prosperity, well-being and comfort.

Comfort in the social world

The most important for the population of the country are "home values" with the focus on the man and his family (Fig. 1). At the same time, the worldview of the modern Belarusians is something more than concern for warmth and comfort in their own "home". For Belarusians, it is very important to expand the boundaries of comfort – outdoors, to children's playgrounds, leisure facilities, health and education institutions, at work. People want welfare to cover the entire human environment, not only the material framework of society, but also to the relationship with each other. In such a situation, individualistic values overlap with social values, harmoniously combining in socially significant activities aimed at the benefit of the native country. 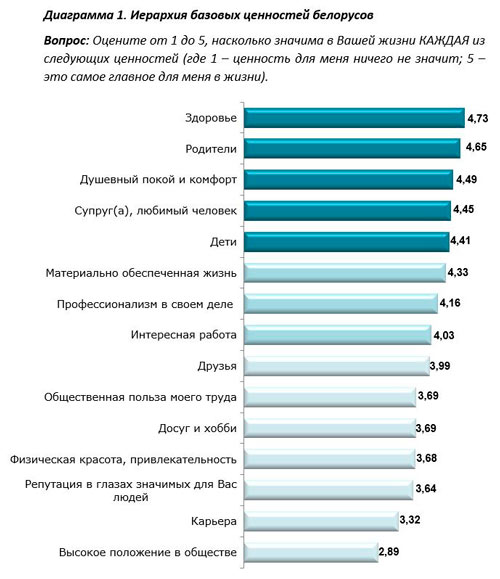 The Belarusian identity can be represented as a cozy "home" or a family – hospitable, friendly and open to friends. Surveys have shown that the collective image of a "typical Belarusian" comprises the positive qualities most often noted by respondents: friendliness, responsiveness, domesticity, hospitality and kindness (Fig. 2).

Therefore, Belarus is a country with an open heart. It is alien to the pronounced individualism and egoism to which Western civilization tends. Belarus forgives a lot. But it will never tolerate betrayal and treachery, and is always ready to give an adequate response to those who come to us bearing a grudge. 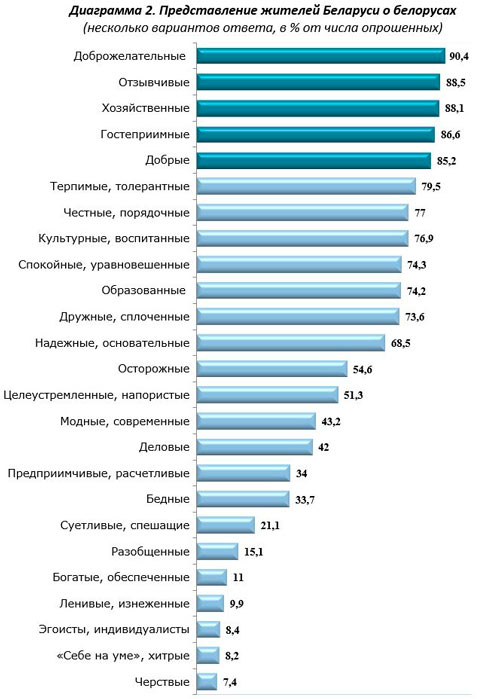 The Belarusian people are characterised by diligence and efficiency, a responsible attitude to work. That is why the extremes of haste and fuss, laziness and effeminacy are alien to our people. The country's population lives in a gentle rhythm, preferring domesticity and thoroughness to the frenzied pace of the modern civilization. At the same time, the values of individual initiative and activism, though in the background, are becoming increasingly important, especially for the youth. In particular, a major part of respondents (from a third to a half) considers Belarusians purposeful, assertive, and enterprising (Fig. 2).

Belarusians love order, where everyone is in their place doing "their own business". That is why citizens do not want to be engaged in what is within the responsibility of others, to substitute the functions of state institutions. They prefer to operate with rational rather than speculative categories, are aimed at development and are forward-looking. The respondents associate their well-being with cohesive public administration, whose improved efficiency were mentioned by President A. Lukashenko at the VI All-Belarusian People's Assembly among the main priorities of the country's development. In turn, the self-government of citizens in the hierarchial principles of the society organization was in the last place.

The Belarusians' focus on welfare and order is reflected in issues of greatest concern to the population. First of all, this is health (62%) and wages (47%). Next is the social and political situation, which is a direct result of the 2020 turbulence. It is natural in such a situation that the fourth place is occupied by personal security, without which no welfare is possible. These concerns are shared by young people, but the most important issue for them is salary (58 %) (see Fig. 3). 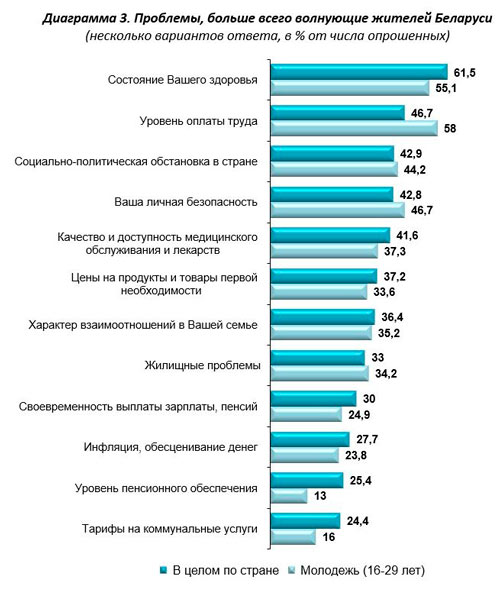 Peace and security as condition of freedom

Faced with the 2020 challenges, the Belarusian people realized how easy it is to lose peace and security. As a result, these values have become a priority for the population. Another telling statistic is the high significance of freedom and human rights for the Belarusian residents (Fig. 4). 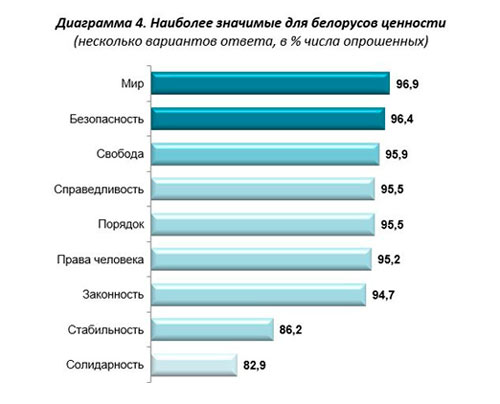 Of course, everything might be reduced to a "responding" tough 2020. But the situational political constraints hardly determines the trends that have been forming for decades. The Belarusian of today wants more independence, is ready to demonstrate his potential and ability to self-realization, is seeking to expand the relevant rights and opportunities, expecting the state to guide development and ensure equal starting environment for moving forward.

At the same time, our understanding of human rights differs from the Western one where the rights of minorities become more important than the rights of the majority, where perversions become the norm, where the individual is higher than the public, where the state is not a value, but a service that serves citizens and their basic instincts.

Obviously, Belarusians value freedom. But freedom doesn't mean doing what you like. A healthy society is a group of citizens with a highly developed social responsibility, who are ready not only to take from, but to give to, the country, who realize that apart from their rights they also have liabilities, who value the benefits received from the state, and who respect the people who live and work nearby.

Thus, the deep values of the Belarusian people are largely identical. The Belarusians want comfort for themselves and their country, conditions for successful development, peace and security. They are ready to work and earn money honestly, are open to dialogue and proceed from the need to keep the balance between the self-realization of an individual and the responsibility of citizens towards community and the state. In such situation, the guarantor for achieving welfare, according to the most Belarusians, is the state, which should be sovereign, strong, effective, fair and social.

Having fingers on the pulse of food security

Taking into account the impact of the severe sanctions and attempts to "turn off" our country from internat...
Дата публикации
23 august 2022
Vitaly Demirov

Healthcare of Belarus through the eyes of medical workers

Citizens of the Republic of Belarus are guaranteed the right to health protection, including free treatment...
Дата публикации
18 june 2022
BISR