Based on materials of research conducted in the Republic of Belarus.

The current geopolitical situation puts the world on the threshold of a global reorganization with the result being the dismantling of all restraining mechanisms – first of all, values, norms, traditions. Purposeful and systematic activities are attempts to re-evaluate and "reset" the historical and cultural heritage of entire generations and even nations, artificial opposition of "democratic" and "traditional" values.

A typical destructive political technology on a global scale today is the desire to withdraw from the human environment everything that is capable of bearing, in the words of Academician D.S. Likhachev, the "reconciling role of culture" [1], thereby removing the barriers of hostility in the world.

On the other hand, critical epochs are characterized by the growth of civic awareness, interest in their own history and culture, ideological and spiritual backgrounds. Society is more frequently asking key questions: "What are we creating?", "Where are we going to?", "Where is our place in the modern turbulent world?", "What values unite us?". For the state, this is a historic chance not only to respond to the request of citizens, but also to involve them in elaboration and implementation of the image of the future, based, among other things, on their ideas and expectations.

In recent decades, the issue of values is increasingly addressed in a problematic aspect. The reason for this is a number of new conditions and challenges that not only the Republic of Belarus but the entire world community has to face. Exacerbation of challenges, in turn, requires an objective and impartial analysis (diagnosis) of current trends in the field of values, determination and, if necessary, adjustment of the defining attitudes and principles of building public policy in interacting with society. 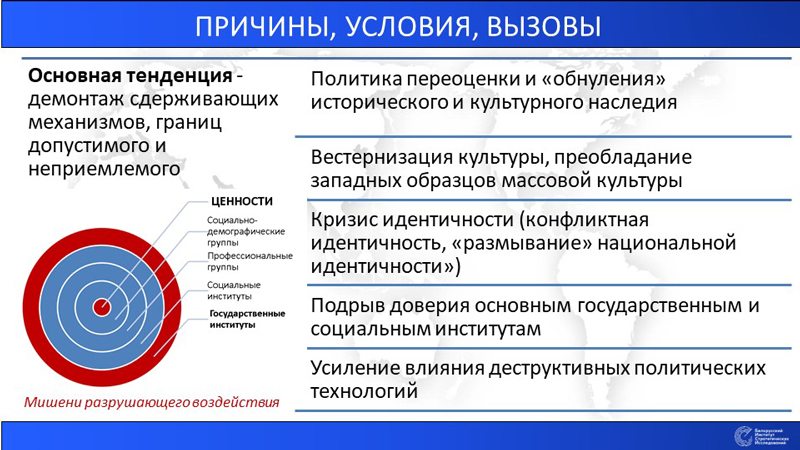 The global world trend of the last decades and a serious challenge for many countries is "Westernization", the gradual absorption of national characteristics by Western mass culture, the violent change of social ties and the structure of society, elimination of borders of the permissible and unacceptable resulting in a general identity crisis.

If you look at the geographical map, you can see that Belarus is located on the border of "two worlds", civilizations. That is why they have always, at all times, tried to change us, remake us, reassign us, and, finally, conquer us.

The range of tools for influencing people's minds and attitudes is wide. These are appeals to emotions, whipping up feelings of dissatisfaction, fears and depressive moods, playing on people's ambitions and requests. Their goal is to weaken the "reinforcing" foundations of any society: undermining trust in main state and social institutions, erosion of the value core of society (for example, deference of national traditions, re-coding family values, etc.).

A separate area is the manifestation of the deforming historical memory as a result of deliberate and purposeful distortion of history, imposing alien meanings and interpretations, artificial politicization of key events and dates. 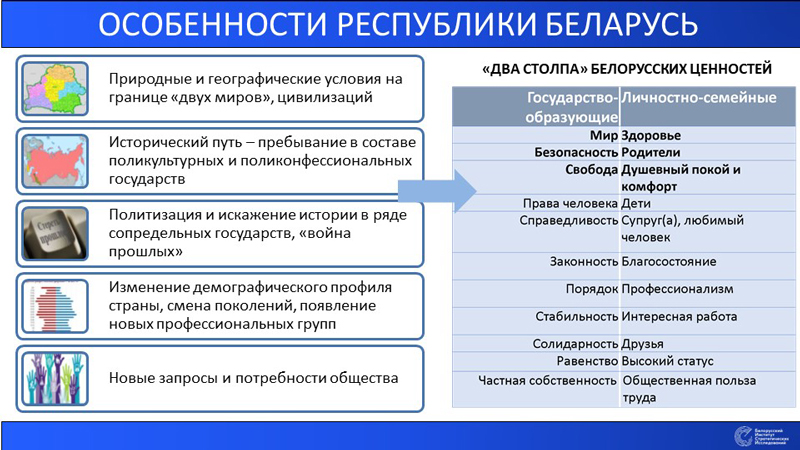 The Republic of Belarus was forced to enter into the subject of historical politics, due to objective circumstances, mainly due to the processes taking place in neighboring countries. Poland, Lithuania, Latvia, and Ukraine in late 1990s – early 2000s started actively looking for the "culprits" of their domestic and foreign policy failures in the "Soviet" past.

Involving young people aged 14 to 31 years in extremist activities is particularly harmful to the value basis of the state and society. According to world historical experience, it is often the youth who acts as the bearer of destructive political ideas, the main actor of structural revolutionary transformations and the main recipient of the influence of both internal and external socio-political forces interested in destabilizing the situation in a particular state or region. Belarus is no exception in this sense, as evidenced by the systematic reorientation of the work of foreign non-profit organizations and foundations specializing in the "democratization" of Belarus in 2000-2020 to support the alternative youth movement aimed at its radicalizing and changing the socio-political orientations of Belarusians over time (natural self-destruction of the ideological foundations of the nation).

In addition, current trends in social networks indicate the introduction of more subtle, indirect ways of forming the value "taste palette" of young people, including those based on artificial intelligence technologies. This direction, in particular, involves the possibilities of the TikTok social network which has powerful tools for influencing the consciousness and behavior of users, opening up wide opportunities for controlling the masses.

In general, Belarusians do not dramatize new challenges and attacks on values, perceiving them, on the one hand, as a geopolitical fate, and on the other – as an incentive to always be on toes, to fight for value identity. 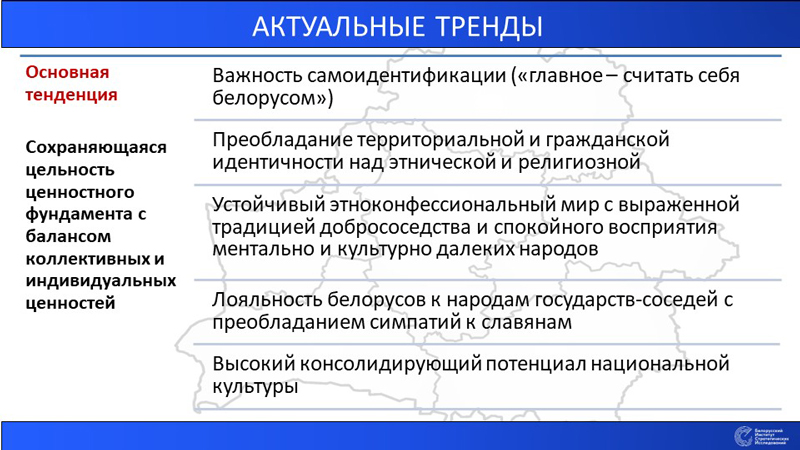 To date, Belarusians maintain the stability and integrity of the value foundation. Its basis is the well-being of the country, the family, spiritual comfort, the desire to provide their children and grandchildren with higher standards of living. Society rejects the destruction of family values, the conflict of generations, the imposition of any alien norms and behaviors. This acts as a "reference point" in the development of social, information and legal policy of the state.

The main values of the Belarusian society, which are shared by almost the entire population, are peace, security, freedom (including from imposed ideologies), justice. The general prerequisites for their formation are the historical path of the Belarusian people preceding the modern period (being part of multicultural and multi-confessional states).

The main trends in the value picture of the world of modern Belarusian society can be attributed, accordingly: the importance of self–identification ("the main thing is to consider yourself a Belarusian"), the predominance of territorial and civic identity over ethnic and religious, high consolidating potential of culture. Belarusians call the country's cultural heritage objects (palaces and castles, Slutsk belts, Belovezhskaya Pushcha, etc.) the main symbol of national and state identity. At the same time, the subject of national pride of modern Belarusians, apart from the contribution of the Belarusian people to the Victory in the Great Patriotic War, is the cultural heritage of the Belarusian Renaissance (F.Skorina, M.Gusovsky) and the second half of the XIX – early XX century (Ya.Kupala, Ya.Kolas, M.Bogdanovich). 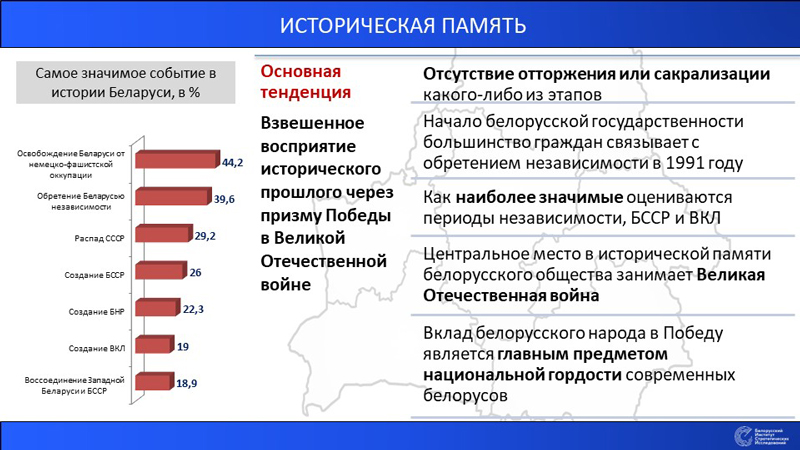 In the context of historical memory, Belarusians tend to calm, without rejection or sacralization of any of the stages, perception of the historical past through the prism of the Great Victory. The majority of survey participants believe that the USSR made a decisive contribution to the Victory over Nazism, and the propaganda of fascism should be prosecuted by law [2]. [2].

A significant factor setting the trend for developing society's value orientations is the change in the demographic profile of the country: a significant part of the generation of Soviet values carriers is "leaving", and the real "perestroika" and "post-Soviet" generations are entering active social and political life. Acting as a subject of relations, young people at the same time become the object of the influence of foreign destructive forces that seek to weaken the stability of the national interests of the Republic of Belarus, encroach on its constitutional system, national identity through changing the consciousness and behavior patterns of young people. 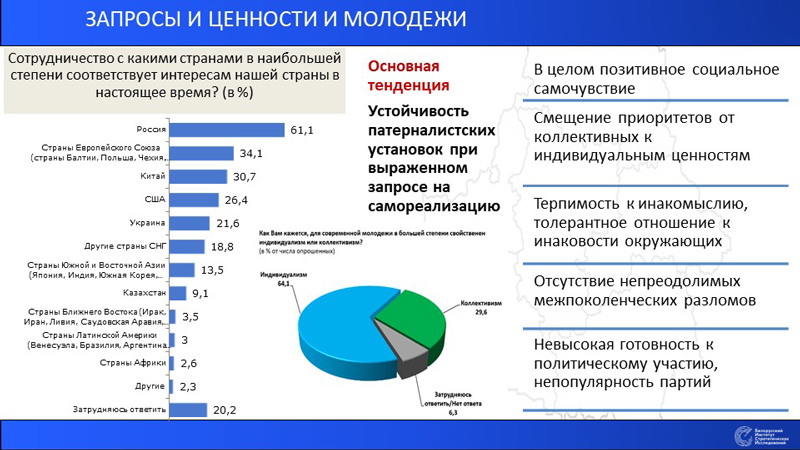 Among the trends that have emerged so far, on the one hand, it is possible to highlight the increasing importance of individualism, freedom and initiative for young people, on the other – the desire to free themselves from the shackles of traditions and customs, a less responsible attitude to the institutions of the state, religion, and family. Sociological studies confirm the existence of prerequisites for accelerating the value gap between generations under the influence of the rapid development of information technologies. In fact, modern Belarusian youth is characterized by individualism (about 60%), not collectivism (about 30%). In order to ensure the conditions of a successful life, young people are ready to work hard, take personal initiative. The results of the study indicate differences in percepting patriotism by generations. In particular, if for older people patriotism is more associated with the concepts of "commitment" and readiness for self-sacrificing defense of the Motherland, then for young people it is primarily love for their country, its history, culture, language (39%) and active activity for the good of the country (33%). Amid older generation, young people show greater tolerance for dissent, tolerant attitude to the otherness of others (national, cultural, health characteristics, etc.)[3]. In general, the mutual influence of real and network environment makes it possible to improve the tools and technologies of information influence on young people, stimulating the formation of positive value attitudes in them. 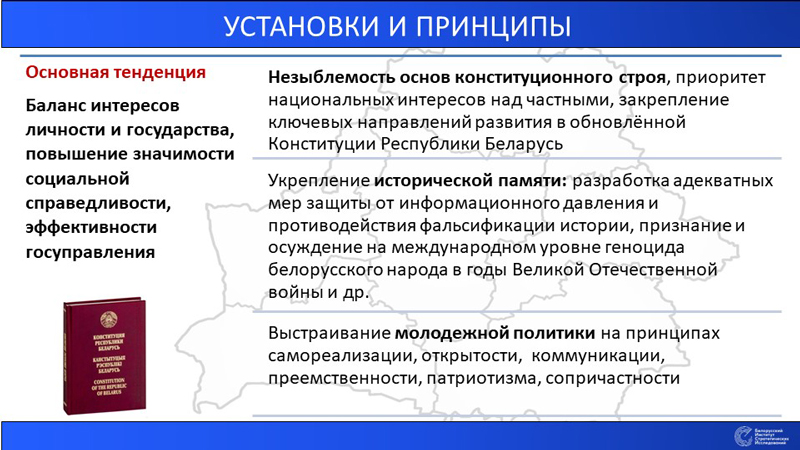 Modeling the evolution of value matrix of society, it is possible to assume with high probability an increase in the importance of social justice and equality of opportunities, the effectiveness of public administration. Along with this, the value of traditional forms of family and marriage relations is important for Belarusians (it is important for more than 85 percent of Belarusians) [4]. This aspect, same as many other areas related to identity (preservation of national identity, cultural and spiritual traditions) is reflected in the updated Constitution of the Republic of Belarus [5].

When formulating the principles of the development of socio-legal identity from a socio-legal perspective, it seems important to be based not only on universal approaches to the rule of law and democracy, but first of all on values and attitudes corresponding to national interests. For Belarusians, such values are the inviolability of the foundations of the constitutional system, the balance of interests of the individual and the state, respect and trust in the legitimate government, creativity, sacrifice, priority of national interests over private ones, justice, rejection of external pressure. At the same time, the largely abstract and devalued principle of "democracy" may well be revitalized through the development and implementation of the idea of "democracy", as the most clearly reflecting the essence of the socio-political model of the future being built both in the Republic of Belarus and, possibly, in Russia.

The key areas of strengthening historical memory are the following positions: joint development by the state and interested organizations of adequate measures to protect against information pressure and counteract the falsification of history, recognition and condemnation at the international level of the genocide of the Belarusian people during the Great Patriotic War, popularization of scientific knowledge, bringing the achievements of historical science to a wide audience.

At the present stage, the following are seen as the main principles of the state youth policy, contributing to the strengthening of intergenerational value ties: self–realization – as the creation by the state of favorable conditions for the development and disclosure of talents of the younger generation, openness – as the rejection of falsehood, imitation, formal approach in working with youth, communication - as constant feedback and interaction, continuity – as a stable system of transferring experience from the older generation to the younger, patriotism – as love for the Motherland, dedication, involvement – as the formation of demand and high motivation of young people in building the future of their country.

By combining these attitudes into a single system of protection and reproduction of national values, we will be able not only to survive in the intercivilizational struggle, but also to ensure the stability of the ideological orientations of society, its readiness to strive for understandable and achievable higher goals. 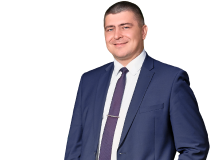 Healthcare of Belarus through the eyes of medical workers

Citizens of the Republic of Belarus are guaranteed the right to health protection, including free treatment...
Дата публикации
18 june 2022
BISR

The ethno-confessional world, trust of the church, gradual decline of religiosity: the main trends in the sphere of reli

The main result of the balanced and consistent policy pursued by the state in the ethno-confessional sphere...
Дата публикации
08 june 2022
Svetlana Aleinikova