In the context of the coronavirus pandemic and market instability, government leaders and company management are increasingly interested in obtaining objective assessments in order to look beyond the event horizon. Now, as never before, the load is increasing on analytical services of large oil companies and holdings, which are trying to simulate situations and work out the right management decisions in this turbulent time.

The oil market directly depends on the development of the world economy — the higher the production of goods and services (GDP), the higher the demand for energy resources, including oil, and vice versa.

In the public domain, there are now a sufficient number of forecasts by analytical centres about the growth prospects of the world economy and the oil market (as its derivative) in the context of the pandemic and the general blockage of economic and production processes.

As a rule, forecasts are similar in pessimistic sentiments and comparative assessments with the Great Depression (USA, 1930s).

On the average, they estimate that the coronavirus pandemic will deprive the global economy of $ 5.5 trillion from 2020 to 2022 (the forecast by investment bank JPMorgan Chase & Co.). This amount is equivalent to Japan’s annual GDP. The growth rate of the world economy will decrease from 3.5% to 0.5% (UBS Group).

According to the calculations by the World Trade Organisation, the drop in the volume of world trade could be more than 30% amid the disruption of normal economic activity and life around the world by the coronavirus pandemic. The recession in 2020–2022 may exceed the scale of the decline in world trade during the global financial crisis (2008–2009).

The losses in the global economy will occur due to absenteeism of employees of enterprises at work, decrease in the productivity of companies, decrease in tourist activity and a number of business trips, disruption of production cycles, supply chains, and reduced trade and investment.

In the wake of the decline in consumption in the world of goods and services, it is expected that the aggregate demand for oil and petroleum products (including motor fuel) will decrease by 25–30%.

Let us remind you that earlier (even before the start of the coronavirus pandemic and the collapse of the OPEC+ deal on 6 March 2020) during 2019, there was a gradual decline in the main driver of world GDP — the Chinese economy — due to stagnation in demand for goods and services both in the domestic Chinese market and in its partner countries.

The coronavirus pandemic and the March collapses in oil prices called into question the implementation of many investment projects for the development of new fields and the development of shale oil production in the United States.

In early April, the second-largest US oil shale company Whiting Petroleum Corp. declared itself bankrupt due to significant debt load caused by the high cost of shale oil production (the payback of such production is possible only at world prices above $ 41–42 per barrel of Brent oil).

This event led to a change in the position of the United States in relation to the Russian Federation (earlier Washington announced the need to impose sanctions against Moscow for the collapse of the deal with OPEC+) and to the negotiations accelerated by Washington between key oil producers to stabilise oil prices under the “new OPEC agreement+”. The change in the relations was facilitated, among other things, by the publication of statistics on a sharp increase in the number of cases and victims from coronavirus in the United States and the expected economic decline, which does not play into the hands of Donald Trump in the context of the election campaign.

For reference, on 6 March 2020, the parties to the OPEC+ agreement did not reach an agreement to extend the deal to reduce oil production, with the deal ending on 1 April. The ensuing price war led to significant price reductions, which exacerbated the overall decline in consumption amid the coronavirus crisis. The price of Brent crude oil dropped below $ 25 per barrel — a month before it cost $ 50. 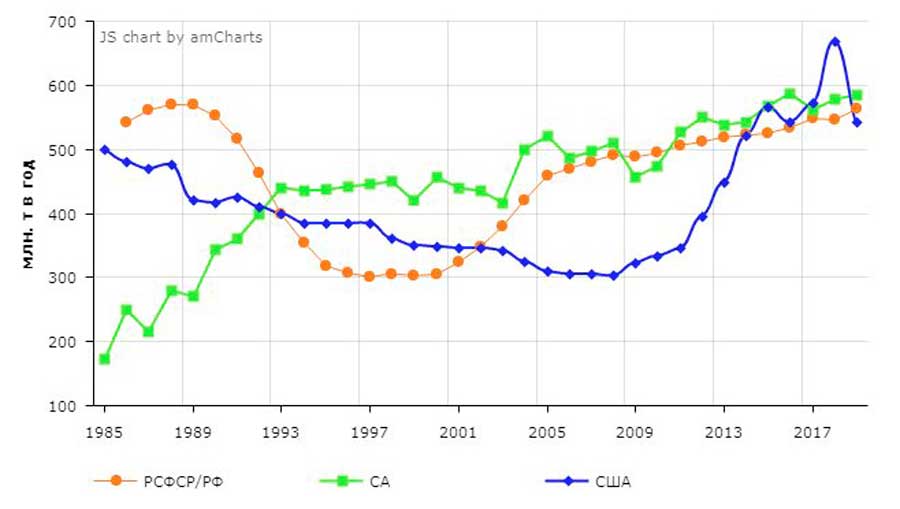 In early April 2020, the following significant events took place, which changed oil trends from a decline to a sharp increase (on 2 April 2020, at the close of the session, the oil price increased by more than 32%):

As part of negotiations between the participants in the OPEC+ deal, a preliminary agreement was reached to reduce oil production in Russia and Saudi Arabia by 2.5 million barrels each, Iraq — by 1.06 million barrels, and the UAE — by 0.72 million barrels.

For reference, on 31 March, 2020, Urals prices fell to $ 13 per barrel. At such a cost, export duties on oil are cancelled and the tax on the extraction of minerals, which bring more than a third of the revenues to the Russian budget, is sharply reduced. On 2 April, the price of Russian oil dropped to $ 10.54 per barrel, the minimum since March 1999. At such prices, the budget practically does not receive income from oil taxes, and it is unprofitable for companies to sell oil in Europe.

Quotes reached negative values (this means that transportation costs, payment of export duties and other expenses exceeded the average cost of Urals), despite the decrease in export duties from 1 April to $ 14.90 per ton compared to March level — to $ 52 per ton.

On 3 April, the cost of Russian Urals oil in North-Western Europe rose by $ 3.89 per barrel to $ 14.34 per barrel. Formula prices are positive. 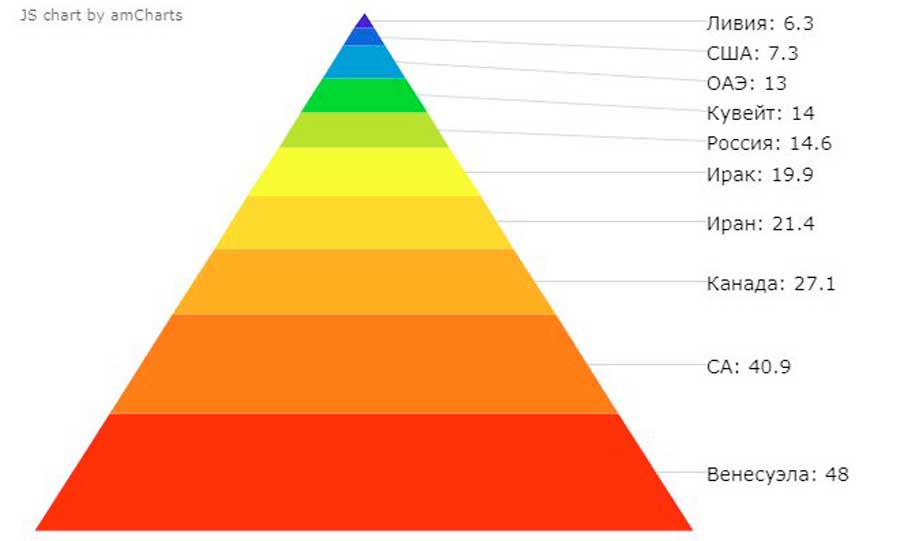 At the same time, OPEC+ expects that other countries will also go for a reduction: the USA, Canada, Brazil and Norway. The United States is not part of an agreement to contain production — such deals are prohibited by local antitrust laws, but this country is expected to decrease production by 4 million barrels per day in the next three months due to filling of storage facilities.

Despite preliminary approvals, on 9 April, during video talks, Mexico refused to cut its production by 400 thousand barrels per day, insisting on its readiness to ensure a reduction of only 100 thousand barrels. 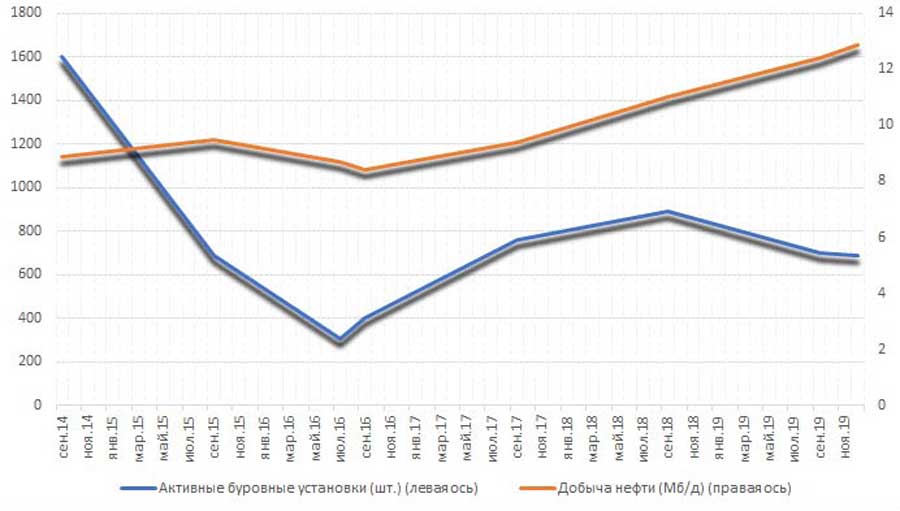 Of the 9.7 million barrels of oil, Russian oil companies will reduce production by 2.5 million. In the absence of a new deal, Russia would cut production by up to 50 %, which would inevitably lead to massive shutdowns of wells.

For reference, the new OPEC+ deal includes 23 countries. A peculiarity of the current deal is the “connection” to it of the oil-producing countries — members of the Big Twenty (G20) (USA, Canada, Brazil, Norway, Argentina), which also intend to reduce production by 5 million barrels per day. The total decline in production (OPEC+ and G20) in the world may amount to about 19 million barrels per day.

This deal was named “OPEC+”, like the previous one, which was in effect from the beginning of 2017 to 31 March 2020. Until 1 April 2020, the production quota of the countries participating in the agreement was supposed to be 1.7 million barrels per day below the level of October 2018.

On 6 March 2020, Saudi Arabia, as part of negotiations to extend the current restrictions, proposed to increase production cuts by 1.5 million barrels per day until the end of 2020 (OPEC members — 1 million, non-cartel countries — 500 thousand). However, the deal did not materialise, which led to a “price war” and, as a result, to an even greater reduction in oil production.

Nevertheless, what is important now is that the former geopolitical rivals have moved from confrontation to dialogue in the oil market and united in the face of the threat of the coronavirus pandemic. This gives hope for an optimistic development of events in the global economy.

Having fingers on the pulse of food security

Taking into account the impact of the severe sanctions and attempts to "turn off" our country from internat...
Дата публикации
23 august 2022
Vitaly Demirov

For the new world, the key is not to breakthrough, but to preserve the best