The concepts of peripheral capitalism (PC) have a distinct genetic link with the "parent" theories of economic growth which, however, are developed with the main emphasis being made on the industrialized countries that have passed the entire trajectory of capital formation. Under such approaches the PC countries simply need to replicate the corresponding growth models. In this regard, Richard Nelson, professor at Columbia University, in his Leontief Prize awarding speech in October 2005 indicated the fallacy of past views that foreign aid, encouraged by relevant domestic policies, will solve all problems. Massive investments are required but they are not enough.

Dependency theory emerged in the 60s-70s in Central and South America. The theory was seeking an answer to the question of why so many countries in the world were not developing. The final version of dependency theory actually integrates different theories, including world-systems theory, historical structuralism theory, and various neo-Marxist theories.

The standard reply from representatives of economic authorities and transnational corporations of highly developed countries was that those countries were pursuing the wrong economic policies. Dependency theory gives a different answer to this question: it is the very established international system of capitalist relations that constrains the development of countries that hold a certain position in it. The nature of this system is in the exploitative conditions and one country's superiority over another. It is crucial to explain what is the structure of this system of cultivating unequal exchange and building relations of exploitation.

First of all, this structure is based on the fact that there are different types of countries in the world, which differ in performing various functions in the global economy. It is the division of labor at the global level that is the basis of such a structure.

Thus, in highlighting the general structure of unequal exchange described inside dependence theory, 4 groups of countries with special type of inter-relations should be identified. The first type includes the "central countries of the center". These are the richest and most powerful countries (the United States, Great Britain, Germany, Switzerland, the Netherlands, Singapore) concentrating the main institutions for managing financial, energy and commodity markets, digital platforms, technical ecosystems, and leading transnational corporations (TNCs).

The following are countries on the "periphery of the center". These are modern industrialized countries (Sweden, Japan, South Korea, Taiwan, etc.), or commodity-dependent countries (Canada, Norway, Saudi Arabia, UAE, etc.). As for the commodity-dependent countries, the criterion for their reference to the 2nd group of the "periphery of the center" is the share of presence in the international commodity markets. The wealth of these countries is mainly determined by the power of their real sector, while the "central countries of the center" concentrate their fixed capital not from the sale of goods and services, but from managing the flows of such sales.

Next are the countries of the "center of the periphery". These are countries that are still developing (South Africa, India, Brazil, Pakistan, etc.), but have not yet achieved a level of national wealth, infrastructure development and presence in global value chains comparable to the first two.

Next are the countries of the "periphery of the periphery". These are the poorest countries (Cambodia, Zambia, Liberia, Bangladesh, Nepal, etc.), which practically do not contain any points of growth and internal development resources, have a high levels of corruption and low degree of infrastructure development.

The international division of labor between these four groups of countries is quite specific and complicated. But in general we might say that the the first two groups ("central countries of the center" and the "periphery of the center") dominate mainly due to their scientific potential (research schools, "R&D" centers, developed infrastructure for intellectual property protection and, accordingly, a high share of royalties in the income of economic entities) converted into advanced technologies and innovations. At the same time, other two groups, on the contrary, are increasingly defined by the presence of the commodity sector of the economy (with a low share of presence in international markets), agricultural production and attraction of cheap labor.

The Nobel Laureate in economics P. Krugman has invented tools enabling to prove more rigorously the old dichotomy of increasing returns that create wealth, and diminishing returns that create poverty. Any initial level of commodities productivity, including in agriculture, sooner or later will face a diminishing return of an intensive or extensive nature. Small economies are often built around exporting a single product, be it coffee or carrots. If a country has no alternative source of employment, then the diminishing returns will result in real wages to decline, and the country to become poorer. This thesis is rather related to the "periphery of the periphery" countries.

The "center of the periphery" countries have problems of a different nature. As a rule, there takes place an imitation, which starts to create a market enabling the privileged to buy everything, as in any developed country, primarily through imports. This rule condemns the major segments of the population to poverty, since high import intensity, one way or another, has to involve the artificial appreciation of national currency, which negatively affects the national producers and consumers. In fact, the result of such national currency appreciation is the further increase in the import intensity index, which is shifted to a decrease in the space for issuing the national currency, i.e., it is the the exchange rate retention that dictates the expensive money policy. In either way, it leads to stagflation, which in parallel combines economic decline and rising prices.

In addition, the formation and emphasis on a privileged consumer society in the "center of the periphery" countries inevitably result in stocks reduction. In addition, a significant deduction from stocks due to transfer of profits and interest from foreign capital, from the country. New technologies introduced by transnational capital, as a rule, correspond to the "yesterday's" development, but they are so expensive to the countries of the "center of the periphery" that "eat" another share of stocks.

As for the neoclassical prescriptions to counter inflation in the PC countries, it should be noted that they do not accord with real cause of inflation in these countries. Prescriptions for reducing government budget deficits (through cutting governmental expenditures, administrative apparatus, reducing allocations for social needs), credit restriction and expensive money policies, have been and are being applied to a different degree in many catching-up economies. At the same time, development and economic growth do not emerge since it is almost impossible in reducing the share of spending and increasing costs. The compression of liquidity and the volume of economic transactions, which is typical for countries following such prescriptions, poses specific phenomenon for them – the struggle for income redistribution. This is the struggle of workers, trade unions and other organizations against the high living cost and for better wages, which is increasing in the process of the social structure evolution and emerging middle strata of society. This is the struggle for the surplus product or the total profit resulting from the growth of labor productivity caused by use of new technologies and organizational innovations. The way this surplus is used by the "center of the periphery" countries that do not have emission income and royalties, determines the rate of production growth, the level of employment and the need for qualified personnel, etc. Most of this total profit in the "center of the periphery" countries is appropriated by a rather narrow layer of the largest inputs owners. When, as a result of another struggle for redistribution, workers manage to achieve an increase in wages, this affects both the level of consumption by the elite members of society, and production, due to increase in investment costs for its development. For this reason, the increase in the effective demand of workers is temporary, as it puts pressure on the supply and the ability of economic entities to pay high wages in the context of reduced competitiveness and the loss of markets that quickly respond to lower investment costs and innovations. Credit restriction and the policy of "expensive money" in this case only aggravates the situation. Reaching the critical point of this situation in the countries of the "center of the periphery" triggers a new cycle within the "closed political cycle" – alternation of democratization periods and "firm hand" regimes. At the same time, contrary to expectations, the "circular democratization" of the "center of the periphery" countries does not bring elements of inclusive development, nor does it create prerequisites for the growth of the middle class. Actually, this is an "undercutting of the elites" who owned most of the capital goods, along with their lobbyists in the structure of state administration. Such "undercutting" results only in expanding the "privileged stratum of consumption", which requires strict "rules of the game" in order to harmonize the interests of different, but equal in power groups. Consequently, one or another country of the "center of the periphery" as an integral subject loses one of the key aspects for competitiveness at external borders. The country is becoming more inert in response to external shocks and flexible market conditions, less efficient due to the growth of transaction costs and reduced opportunities to use cooperative advantages. 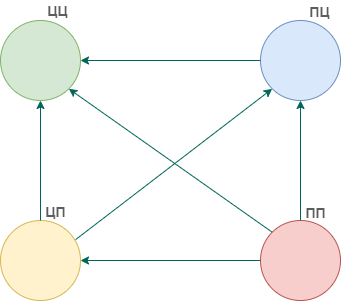 The next thesis refers to classes division into poor and rich in all countries of the 4 groups. The lower the group in which the country is located, the less expressed the presence of the middle class in it. The peculiarity of this separation, according to dependence theory, is that all elite strata in all countries of the 4 groups interact with each other to create more wealth (multiplicative effect – big money makes even more money) and boost the stability of the dependence system as a whole.

The third thesis is that all this structure, with its international division of labor, class division and cooperation, exists within the larger world system called "global capitalism". This system possesses, first of all, the conceptual power, meaning that the economic theories of liberalism determine all the political-economic and financial theories that could serve the development interests of individual countries and regions, not just the central countries. Central banks, transnational corporations and international institutions, educational systems, and global media within the framework of such structure of global capitalism, are only tools for implementing such conceptual power. It does not address the interests of developing countries, nor does it contribute to their progress and does not equalize opportunities.

The only way to break the cycle of catch-up development and the "closed political cycle" is digitalization in its two main effects: on the one hand, creation of larger (with cross-cutting self-adaptive business processes), but flexible, economic entities that involve wide segment of precariat, small and medium-sized entrepreneurs, into cooperation models, and, on the other hand, the creation and management of holistic product and service systems that allow using the power of "network effects" and techno-ecosystems instead of traditional competition for a share in international markets of goods and services.

One of the key requirements of the President in his Message was to increase high-tech exports of output to ...
Дата публикации
18 february 2022
Vitaly Demirov