On June 10, 2021, the Belarusian Institute of Strategic Research took part in the international online conference "The 30th Anniversary of Independence of the Republic of Belarus and the Belarus-China Comprehensive Strategic Partnership" organized by the China Institute of International Studies under the Ministry of Foreign Affairs of the People's Republic of China in association with the Belarusian Embassy in the People's Republic of China. The expert dialogue participants shared their views on a wide range of issues.

The BISR Director Oleg Makarov in his statement noted the importance of the stage of development experienced by both China and Belarus.. These days, Beijing is hosting the 6th plenum of the Central Committee of the Communist Party of China of the 19th convocation. Oleg Makarov expressed confidence that its results will have a historical nature. They will form the basis for the Party congress in 2022. The anticipated decisions on the issues of ideology and party building, i.e. the foundations of the political system of society, will determine the resilient development of the Chinese state for years to come.

The Republic of Belarus is also at an extremely important and responsible point of its development. The planned adoption of amendments to the Constitution of the Republic of Belarus at a February 2022 referendum will symbolize a new stage of state-building. It is expected that the updated democracy model will become more resistant to any attempts of internal and external destabilization.

Oleg Makarov also emphasised that it is amid the global economic recovery trend that the advantage of stable partnership ties between the Republic of Belarus and the People's Republic of China is the case, as well as the immutability of the position on strengthening cooperation. He separately noted the role of Chinese think tanks in fostering strategic partnership relations between the two countries, as well as in maintaining an expert-analytical dialogue with Belarusian colleagues.

BISR analyst Siarhei Viarheichyk in his report analyzed the status of and prospects for developing expert diplomacy as an important and integral element of the strategic partnership between the Republic of Belarus and the People's Republic of China, covering the comprehensive interaction of think tanks of the two countries.

He justified the need to expand the spheres of interaction within the expert dimension of bilateral public diplomacy.

Within the framework of cooperation with Chinese think tanks, the Belarusian Institute of Strategic Research has proposed a permanent expert dialogue "Belarus and China: a common development trajectory", which will contribute to mutual interest and recognition, as well as the search for new innovative growth points and breakthrough ideas. 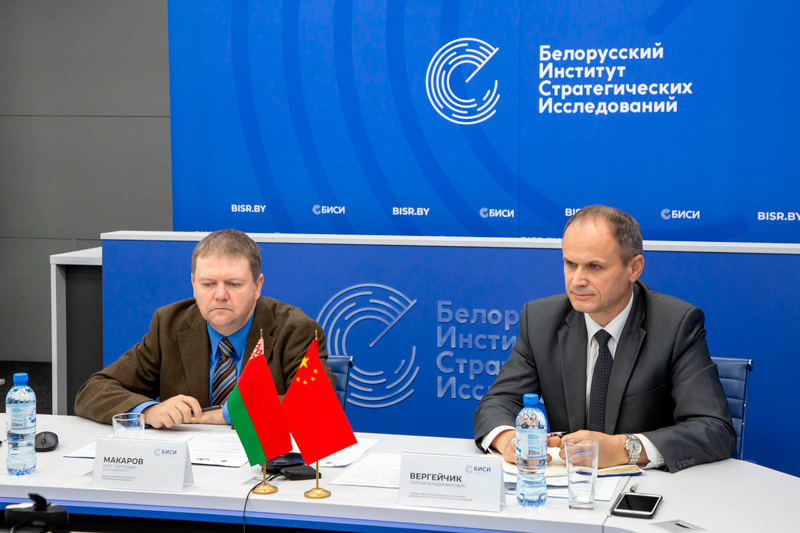 On November 28, 2022, the Belarusian Institute of Strategic Research, invited by the China Center for Conte...
Дата публикации
01 december 2022

Expert dialogue with Kazakhstan: in an atmosphe...

On November 16, BISR leaders and analysts participated in a round table organized by the Embassy of Kazakhs...
Дата публикации
17 november 2022